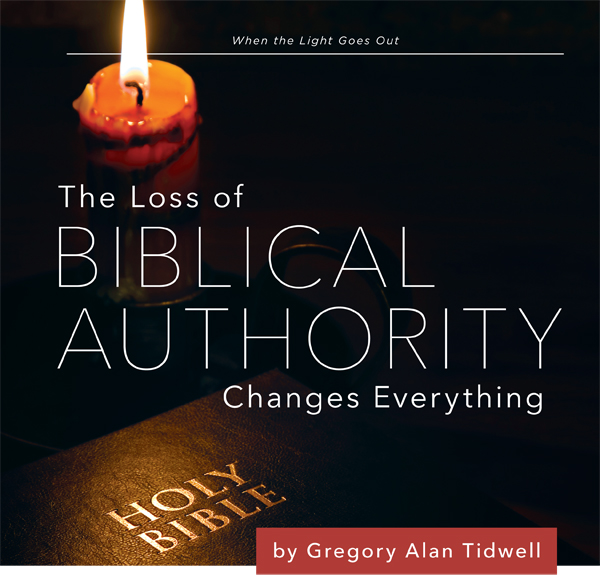 Reprinted from the March 2016 issue of Gospel Advocate Magazine, this article discusses the fact that if we lose our conviction in the authority of Scripture, we will have lost the light of His presence.

“If then the light in you is darkness, how great is the darkness!” Jesus warns in Matthew 6:23 (ESV). When that which is supposed to provide light becomes darkness, the darkness is overwhelming. Spiritual light comes from God. When those who claim to be spiritual abandon the Word of God, they become the source of devastating darkness. As David Lipscomb warned his readers:

“There is one great danger in seeking union among men – that is, in uniting with men we may separate from God. Often when we seek to get closer to one body we move away from another. We must be careful not to separate from God, because a union without God is a union in falsehood, a union with death. In any union of Christians, God must be the center and the head. We come into union with God by doing his commandments, by following his directions, and by walking in the light, as he is in the light” (Gospel Advocate, 1909, pp.1486-87).

The church of Christ is dividing into two irreconcilable camps. On one side are those who have kept the same faith. On the other side are those who are experimenting with a broad range of differing faiths. And there is a vast gulf between these two sides, separating the light from the darkness.

You can see the division throughout the radical changes in the work and worship of congregations. The division shows itself in changed definitions about what it means to be a Christian and, at the core, in differing ideas about the inspiration and authority of Scripture. Congregations, schools and other institutions previously following one religion have embraced a different religion. Their light has become darkness.

What the church is going through today mirrors the crisis faced by the church in the mid-19th century. In those days, secular academic theories were applied to religious studies, especially by German theologians. Their approach adapted religious thought to fit secular intellectual fads.

After the Civil War, this new approach to religion came to the United States, popularized by the universities of the Northeast and Midwest. Every major religious group was affected, but none as much nor as quickly as the Disciples of Christ.

David Lipscomb described this situation writing in the Gospel Advocate:

“Nothing indicates the wide departure from the landmarks of truth more clearly, that is taking place among those who started out to restore the ancient order, than the loose views put forth by some of the accredited teachers among them in reference to the authority of God. These show that the old standards have been set aside and new ones adopted” (Jan. 23, 1884, p. 49).

What happened in academia in the 1800s is happening in colleges affiliated with churches of Christ today. This change is a crisis because once you change your view of Scripture, you change the very essence of Christian faith.

What has been taught in colleges has entered congregations. Many church leaders, sadly, have changed their convictions about the truthfulness of Scripture, the authority of Scripture, and the significance of the Bible for the church.

The Truth of Scripture

The doctrine of inerrancy is easy to state. If the Bible is the Word of God, it is free from error because God does not lie; neither does God make mistakes. It is just that simple.

The Authority of Scripture

Your belief in the divine origin of the Bible leads you to accept the Bible as your authority in religion. If God has spoken, it makes all the difference in the world.

The authority of Scripture is the practical application of the lordship of Christ. Jesus frames the question directly, “Why do you call me ‘Lord, Lord,’ and not do what I tell you?” (Luke 6:46).

Those holding fast to their faith will submit to the authority of Scripture. Those who are embracing a different religion will introduce other sources of authority to justify the changes they put forward in the church.

Without a common view of the inspiration and authority of Scripture, there can be no unity in the Lord’s church. For 100 years, from the late 19th through the late 20th centuries, our congregations were remarkably united in faith and practice because of a shared view of Scripture. When church leaders changed their view of the Bible, they were changing their religion.

The Significance of the Bible for the Church

Remaining faithful to the Lord requires that you follow the Bible as the only authority for God’s people. Drawing from a broad range of secular disciplines, alien ideas continually enter the Lord’s church. Rather than following the New Testament pattern for the church, these secular ideas mold the church to fit the pattern of the world. This dilution of biblical authority with secular additions often produces an apostasy of attrition, dimming the light of God’s truth into a compromised twilight.

In a similar vein, church leaders who want to change the fundamental nature of our religion try to limit the accessibility of Scripture. They remove the Bible’s authority in the church by undermining the confidence that most Christians can read and understand the Bible. If reading and interpreting Scripture are reserved for an academic elite, members of this elite are free to make over the church of Christ into a religion that suits their fancy.

What Is at Stake

Our existence as a religious movement rests on faith in God who speaks to us through Scripture. If we lose this conviction, we will have lost the light of His presence. Without confidence in the truth and authority of the Bible, our faith will collapse into a dark and self-serving religion of our own creation. We will no longer be God’s children of light. We will be the world’s children of darkness.

Gregory Alan Tidwell is the editor of the Gospel Advocate. He may be reached by email at greg.tidwell@gospeladvocate.com.