Gospel Advocate Magazine: June 2015 – “The Man in the Middle” by David Gibson 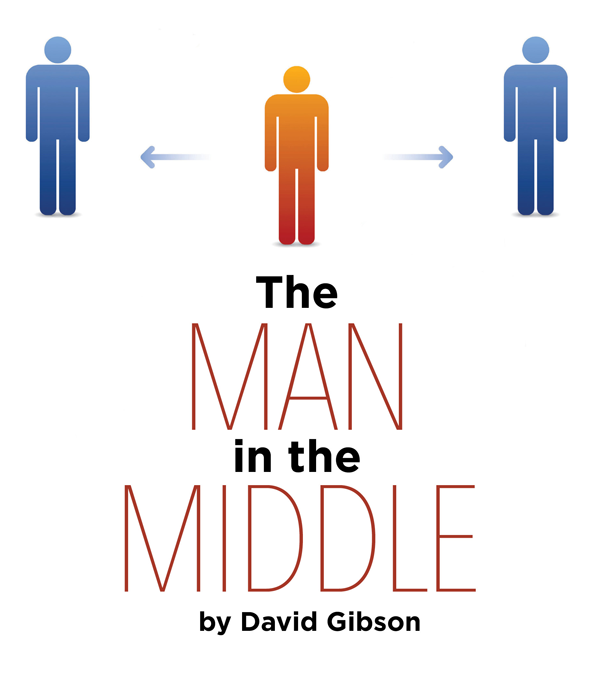 Reprinted from the June 2015 issue of Gospel Advocate Magazine, this article reminds us that there is one God, and one mediator between God and men, Jesus Christ.

A few years ago I heard a retired state trooper tell about his witnessing the execution of a man in the electric chair in Huntsville, Texas, in the 1950s. Have you ever seen anyone executed? I don’t know of anyone else who has.

Executions in our country today are fairly private and, supposedly, humane. The Bill of Rights forbids “cruel and unusual punishments.” In Jesus’ day they were quite public. Crucifixion was not unusual in Jesus’ day, but it was unspeakably cruel. The stark reality is that Jesus died in a shameful, horribly painful way – the death of a common criminal. Had He been executed by the Jewish method, He would have been stoned (John 8:59; 10:31; 11:8). But because Rome was in control, He died by the Roman method.

Jesus’ cross was between two others. Consider how the man on the middle cross was in some ways similar to yet vastly different from the others dying there with Him.

The deaths of all three were prophesied. He “was numbered with the transgressors” (Isaiah 53:12 NASB). All three were enduring the universal experience called death (Hebrews 9:27). Enoch and Elijah were exceptions. Jesus was no exception. All three died at the same place, by the same means, and on the same day. If we had been looking on from a distance, we might have seen little, if any, difference – just another execution in Roman style. But oh, how the cross in the middle stands out from the rest.

How Was Jesus Unlike the Other Two?

They were guilty; He was innocent. “And we indeed are suffering justly,” said one criminal to the other, “for we are receiving what we deserve for our deeds; but this man has done nothing wrong” (Luke 23:41). Not only was Jesus innocent of any crime worthy of death, but He also had never in His whole life sinned – not even once (Hebrews 4:15; 1 Peter 2:22). What a contrast their lifestyles were! The two had robbed to benefit themselves; Jesus had spent Himself to serve others. They had taken; He had given. They had hurt; He had helped. They had broken God’s covenant; Jesus perfectly fulfilled it.

These two men added to their sins by reviling Christ (Matthew 27:44; Mark 15:32). One of them, however, had a change of heart. The thieves needed redemption; Jesus was the Redeemer. One of them was redeemed by Him. In his prophecy of these crucified with Jesus, Isaiah called them “wicked men” (53:9). Luke called them “criminals” (23:33, 39).

This incident proves how far the grace of Christ can go. His blood trickling down the middle cross had enough cleansing power to redeem any wicked, blasphemous felon who truly repented. Jesus said He had come “to seek and to save that which was lost” (Luke 19:10). His critics could not understand why He spent time with those they considered unworthy. What they failed to understand is that we are all unworthy. Jesus came to reach the undeserving with the redemption of God.

Apparently, the impenitent thief went to his grave unredeemed. He had the same opportunity as the other. The Savior was hanging there beside him, but because he didn’t allow Jesus to become his Savior, he died in his sin (John 8:24). It’s not enough for us to be in the vicinity of Jesus.

“But What About the Thief on the Cross?”

So often the thief’s salvation is appealed to in an attempt to prove that baptism is not essential. Apparently he was one of God’s covenant people who had gone astray. During His ministry, Jesus exercised His authority to forgive on at least three previous occasions (Luke 5:20; 7:48; 19:9). The thief is the fourth one cited in Luke’s gospel. Like the others Jesus pardoned, he lived under the Mosaic covenant. Not until some seven weeks after the thief’s death was the new and better covenant of Christ inaugurated at Pentecost (Jeremiah 31:31-34; Hebrews 8:6-13). Christ had to be raised and exalted to God’s right hand before the new covenant of baptism could be proclaimed. Neither the thief nor anyone else before Pentecost was subject to baptism, which involves uniting with Christ’s death, burial and resurrection and the reception of the Holy Spirit.

To appeal to the thief’s experience to prove we can be saved apart from baptism is to ignore many clear passages that teach otherwise (Mark 16:16; Acts 2:38; 22:16; Romans 6:3-5; Colossians 2:12-13; 1 Peter 3:21). Today we are offered the glorious privilege of being “born of water and the Spirit” (John 3:5), of putting on Christ in baptism (Galatians 3:27), and of experiencing “the washing of regeneration and renewing by the Holy Spirit” (Titus 3:5). Thank God for His grace in Jesus Christ!

Jesus Was the Man in the Middle – and He Still Is

People talk about cutting out the middle man. That’s wise in some business situations, but not here. Without our Middle Man, we have no hope. How we need someone to reconcile us to a Holy God! Jesus is that Someone. He stands in the gap between us and God (Psalm 106:23; Ezekiel 22:30-31). “For there is one God, and one mediator also between God and men, the man Christ Jesus” (1 Timothy 2:5).

Christ has gone “into heaven itself, now to appear in the presence of God for us” (Hebrews 9:24). And “He is able also to save forever those who draw near to God through Him, since He always lives to make intercession for them” (7:25; see Romans 8:34).

Jesus is our bridge to God – our only bridge (John 14:6; Acts 4:12). This exclusive claim does not sit well with our politically correct postmodern age, but it is still true. There is only one way, but there is a way.

Jesus promised the penitent thief, “Today you shall be with Me in Paradise” (Luke 23:43). If Jesus wanted the thief to be with Him in Paradise, should we have any objection to being with the thief in Paradise? He’ll be there by the grace of God and so will we. Like the thief, we “have sinned and fall short of the glory of God” (Romans 3:23). Like the thief, we cannot save ourselves; we do not deserve the grace of God. We have more in common with the thief than we may care to admit. In the words of Robert Lowry’s classic hymn, “What can wash away my sin? Nothing but the blood of Jesus.” The same blood that cleansed the thief cleanses us.

Someday we will stand around Christ’s throne praising Him: “Worthy is the Lamb that was slain” (Revelation 5:12). Wouldn’t it be wonderful to catch a glimpse of the forgiven thief as he joins in the praise of his Redeemer? His will not be the face of a hardened criminal, contorted by the agony of dying for his own sin. It will be a gloriously radiant face, totally transformed by the love of Christ. His dying request was simply this, “Jesus, remember me when You come in Your kingdom!”  Jesus did remember him. And if we have experienced the redemption by His blood, He will remember us too. Thank God for the Man in the middle.

David Gibson is an elder in the church of Christ in Commerce, Texas. He may be contacted at david_gibson6@yahoo.com.