Christian Woman magazine is looking for ways to help its readers make prayer a priority. Featured in every issue is a prayer calendar with scriptures to guide our thoughts and help make a meaningful prayer life a reality.

The theme of this year’s calendar is “God’s Promises.” With each issue the two-page color insert will appear on pages 27 and 28, suitable for framing or posting on your refrigerator or near your work station, or you can download the calendar for July and August here.

The January/February calendar can be found here.

The March/April calendar can be found here.

The May/June calendar can be found here. 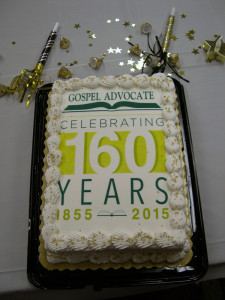 This is a monumental year for the Gospel Advocate – we turn 160 in July. Our employees started the celebration off a little early at our summer quarterly potluck on June 3.

Gospel Advocate has a rich heritage of serving churches of Christ with Bible class materials and church supplies that are scriptural, accurate and always reliable. 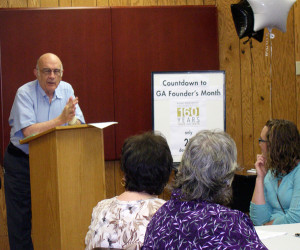 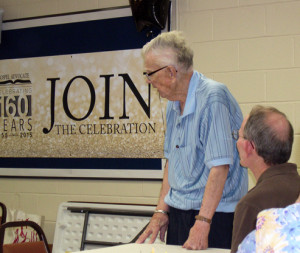 Prominent Nashville-area songleader (and former GA employee) Paul Brown led the group in prayer before lunch, as well as in a favorite hymn, “Doxology.”

Gospel Advocate Magazine: June 2015 – “The Man in the Middle” by David Gibson

Reprinted from the June 2015 issue of Gospel Advocate Magazine, this article reminds us that there is one God, and one mediator between God and men, Jesus Christ.

A few years ago I heard a retired state trooper tell about his witnessing the execution of a man in the electric chair in Huntsville, Texas, in the 1950s. Have you ever seen anyone executed? I don’t know of anyone else who has.

Executions in our country today are fairly private and, supposedly, humane. The Bill of Rights forbids “cruel and unusual punishments.” In Jesus’ day they were quite public. Crucifixion was not unusual in Jesus’ day, but it was unspeakably cruel. The stark reality is that Jesus died in a shameful, horribly painful way – the death of a common criminal. Had He been executed by the Jewish method, He would have been stoned (John 8:59; 10:31; 11:8). But because Rome was in control, He died by the Roman method.

Jesus’ cross was between two others. Consider how the man on the middle cross was in some ways similar to yet vastly different from the others dying there with Him.