Wrap up your holiday shopping with subscriptions to your favorite magazines 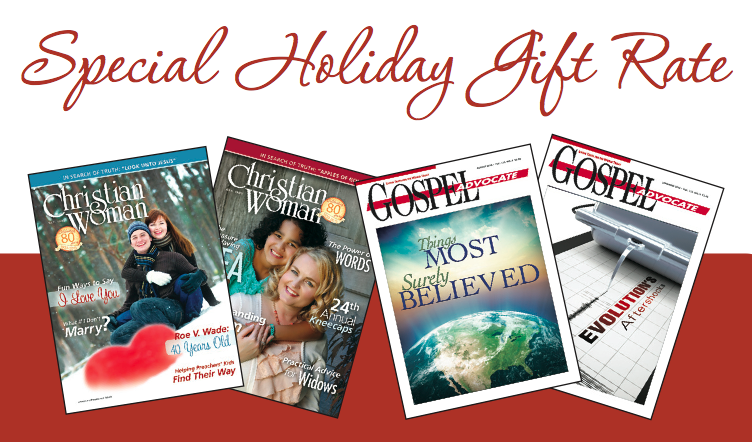 Wrap up your holiday shopping

with subscriptions to your favorite magazines.

For a limited time, subscribe, renew or give a one-year gift of
Christian Woman or Gospel Advocate for only $15.98* each.

* Reg. $16.98. Allow 6-8 weeks for new subscriptions to begin. Offer expires Dec. 31, 2013.
Does not apply to foreign subscriptions. A card announcing your gift will be sent upon request.

In God’s Image: A Study of the Nature of Man

People are more than highly-developed animals. They are spiritual beings with eternal souls. Besides being social creatures, tehy are ethical beings with free wills and the capacity to make meaningful choices. In God’s Image: A Study of the Nature of Man identifies 12 characteristics of the nature of man and helps the reader understand how each applies to both our human and spiritual natures. 13 chapters, softcover. Suitable for individual or group study.

Reprinted from the December 2013 issue of “Gospel Advocate” Magazine.

A 5-year-old, while not completely independent, has chores and responsibilities. He should be able to feed and dress himself and be learning how to read and write. A 10-year-old should be more mature. He might be holding down a newspaper delivery job or mowing lawns. A 20-year-old is either in college receiving higher education or has a full-time job. A 45-year-old man should be reasonably mature. We would expect him to have a productive job, to contribute to society, and no doubt to be looking after a family.

The Bible says that God expects us to grow spiritually: “But grow in the grace and knowledge of our Lord and Savior Jesus Christ” (2 Peter 3:18 esv). It is unnatural to be a Christian for a prolonged period of time and not be taking on the responsibilities of a mature, adult Christian. “For though by this time you ought to be teachers, you need someone to teach you again the basic principles of the oracles of God” (Hebrews 5:12).

So what kinds of qualities can 5-year-olds, 10-year-olds and 45-year-olds look for in themselves that would indicate growing Christian maturity? Isn’t it time we – especially we baby boomers – begin to show maturity? 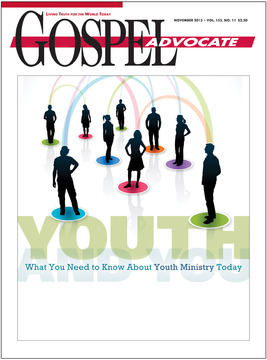 Originally printed in The Anderson Files from the November 2013 issue of Gospel Advocate.

Greg Tidwell, editor of Gospel Advocate, was recently at the Bear Valley Lectures, where he met a man who was converted to Christ 50 years ago in Denver, Colo. At that time, the congregation gave a gift subscription to each person who was baptized.

This man has remained a subscriber and has kept every issue since he became a subscriber. What a wonderful plan to encourage the growth of new Christians by starting them off with a gift of the Gospel Advocate.

Family of God: A Study of the New Testament Church 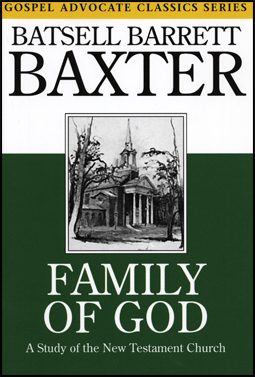 For a limited time (through 11/27/2013), Family of God: A Study of the New Testament Church is available from the Gospel Advocate online store for only $6.99 (Reg $9.99). Simply enter the promo code (P011) at checkout to receive this special offer (applies to first 50 redemptions).

Batsell Barrett Baxter loved the church: “It is because of our deep conviction that Jesus is the Christ, the divine Son of God, that all aspects of his church become significant. It is Christ’s church not ours. . . .In our effort to learn the life that the Lord would have his disciples to live, we are setting out upon a careful study of the church as origianlly established in apostolic times. Our intention is to go back to the original documents which describe the church in its early purity and strength.”

This in-depth study of the church, first published in 1980, examines such topics as the name, the work (evangelism, edification, benevolence), the government (elders and deacons), worship, the Holy Spirit and unity. Each chapter provides detailed analyses with biblical support assuring the reader of the scriptural basis for the discussion.

Baxter was known for his knowledge of Scripture and his gentle spirit. In his decades as a gospel preacher, chairman of the Bible department at David Lipscomb College, and speaker on the national TV program “Herald of Truth,” he presented with clarity and compassion the gospel of Jesus Christ. Batsell Barett Baxter died in 1982. 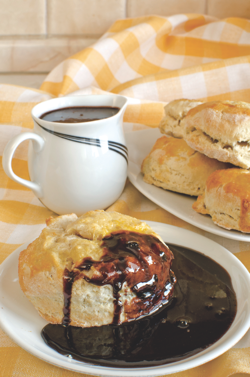 This recipe was featured on the Currents page of the November/December issue of CW. It’s the perfect accompaniment to Debra G. Wright’s article “Chocolate Gravy and Sweet Potatoes” our holiday ﬁction on page 56 of that issue. Or click HERE to view the article.

Winter’s chill often brings with it a desire for comforting, warm food that sticks to your ribs and heals your soul. This sweet recipe for Chocolate Gravy is perfect over biscuits for a special holiday breakfast.

Balance: A Tried and True Formula for Church Growth 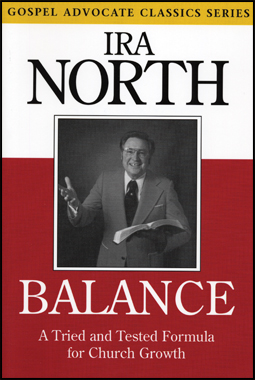 For a limited time (through 11/23/2013), Balance: A Tried and True Formula for Church Growth, by Ira North is available from the Gospel Advocate online store for only $6.99 (Reg $9.99). Simply enter the promo code (P010) at checkout to receive this special offer (applies to first 50 redemptions).

In an era that seems to stress growth at the expense of soundness, Ira North’s principles warrant careful examination. North emphasized doctrinal commitment rather than mere pragmatics. His summary chapter opens with this statement: “God does not require that we be big, or wealthy, or powerful, or super smart. What our Heavenly Father requires is faithfulness.” Includes 22 chapters covering topics such as atmosphere, delegation, benevolence, the importance of children and youth, involvement and visitation. Softcover.

Book Excerpt: “Beyond the Masquerade: Being Genuine in an Artificial World” by Nancy Eichman 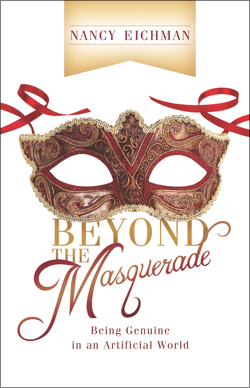 An Excerpt From Beyond the Masquerade: Being Genuine in an Artificial World

What are other people really like in the privacy of their own homes – or on a deserted island – or in a restaurant wooing their potential mate? Someone must have set out to answer those questions when they created reality TV. Coined “fly-on-the-wall TV,” reality TV supposedly delivers the best and worst of real people to viewers as if they were flies on the wall. They see ordinary people do wacky, embarrassing, cruel or even dangerous things we would not usually see or hear.

However, it’s ironic that in reality TV producers often manipulate scripts, fabricate environments and alter the sequence of events to fit their filming schedule and production standards. As Ray Richmond, former TV critic for the Hollywood Reporter, says: “What they are doing on these shows is taking a kernel of fact and using it to construct a multi-pronged piece of fiction in the guise of truth and actuality. This makes for a product that’s not only mislabeled but disingenuous and deceptive.” 1

Do millions of viewers of reality TV know that things are not exactly as they seem? Do they care? What really seems to matter is that they are being entertained. The producers are doing whatever it takes to put on a show. To them, putting on a show is what it’s all about.

The Greeks Started It

About 2,000 years ago, the ancient Greeks knew how to put on a show too. Although their productions were different from ours today, they were no less entertaining to the crowds that flooded into the tiers of seats on the hillside theaters to watch the stage below.

An actor would wear a mask made of linen or wood that he could slip on and off easily. The mask’s features were exaggerated so the emotions portrayed could be seen to the far seats up in the theater. The actor would come out wearing a smiling mask to say a funny monologue. The audience might roar with laughter as they watched him rushing off to don a frowning mask. He would “answer back” with his solemn lines in the next tragic scene.

This actor was called hupokrites, the Greek word meaning “one who answers.” Look slightly familiar? It is the word from which we derive our word “hypocrite.” This did not start out as a derogatory term, but it evolved from meaning an “actor” to a “pretender” or “one who acts a part, one who wears a mask to cover his true feelings, one who puts on an external show while inwardly his thoughts and feelings are very different.” 2

Understanding the original definition of “hypocrite” makes it easy to see how Jesus in Matthew 23 used that term over and over to describe some of the Pharisees who acted “holier than thou” rather than holy. The term perfectly described these spiritual charlatans who acted out their religious parts in front of the crowds.

Eating together has always gone hand in hand with Christian fellowship. Maybe that is why it is so often said that the best recipes in the world can be found in church cookbooks. The Christian Woman 80th Anniversary Cookbook, filled with wonderful recipes for many occasions, will make a great addition to any kitchen.

Order three or more subscriptions to Christian Woman magazine through Dec. 31, 2013, to receive this cookbook as a free gift of appreciation. The cookbook may also be purchased separately for only $14.99.

64 pages, in full color, make this a very attractive addition to your cookbook library. Recipes range from everyday favorites to elegant offerings that would work well for dinner parties.

Try out this easy recipe for Creamy Butternut Squash and Apple Soup at your next gathering.

A small pie pumpkin can be substituted for butternut squash. 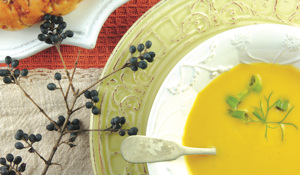 Rinse outside of squash; microwave on high for 1 to 2 minutes. Cut squash in half lengthwise. Scoop out seeds; cut in half again crosswise. Combine squash, apples, chicken broth, onion, thyme, water and pepper in a large stockpot or Dutch oven. Bring to a boil over medium-high heat; reduce heat and simmer, uncovered, 45 minutes or until squash is tender. Remove squash with tongs and let cool enough to handle. Scoop cooked squash from rind; discard rind. Combine squash and 1 cup soup mixture in bowl of a food processor; cover and process until smooth. Process remaining soup mixture in batches. Combine blended soup and whipping cream in same stockpot. Cook over medium heat just until thoroughly heated. Makes about 8 cups. Note: Freeze in airtight containers for up to 3 months. Thaw in refrigerator overnight before reheating.

As I Remember It: An Autobiography 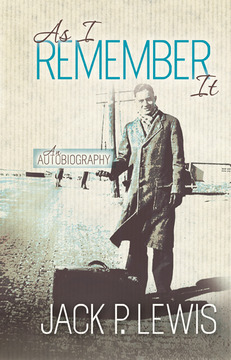 Through the end of the year, As I Remember It: An Autobiography, by Jack P. Lewis is available from the Gospel Advocate online store for only $15.99 (Reg $24.99). No promo code is needed for this special holiday season pricing.

The name Jack Lewis is synonymous with biblical scholarship among members of churches of Christ. In his autobiography, As I Remember It, Lewis tells his story beginning with his boyhood in a small Texas town to his academic pursuits at Abilene Christian University, Harvard University and Hebrew Union, as well as his experiences as a local preacher and a long-time instructor at Harding Graduate School of Religion (now Harding School of Theology). As a scholar, a writer, a mentor, a family man and a committed Christian, Jack Lewis has lived a life the reader will also want to remember. Hardcover, 272 pages.